Musings from Carl Sivertsen (class of ‘70)

Since its inception as a Female Academy in 1822, Athens State University has chameleonized itself over time to accommodate winds of change and serve the most students. But for Carl Sivertsen and his buddies, one special era, Athens College 1966-1970, was their time, and let’s just say, they had the time of their lives.

A college counselor at Carl’s Rutherford, New Jersey high school first introduced him to Athens College. He was looking around for a college experience in New Jersey or another Northeast state for “students not necessarily top of the class” when he heard about Athens College. 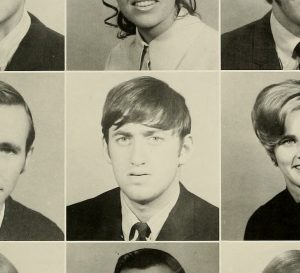 The Sivertsens decided to take a chance with Athens College. They packed up the family car and drove to Alabama, a place none of them had been before. After settling in on the third floor of Sanders Hall, Carl waved goodbye out the window to his parents as their sedan faded out of sight toward the highway. Carl thought, “Now what?”

Carl knew no one, until he met a guy in the dorm who broke his ankle during a rival high school football game up North. For a quick taste of home, Carl ventured to Sherer’s on East Hobbs Street and ordered his New Jersey favorite, coffee and a hard roll. Homesickness intensified as the Sherer’s server presented a stale hamburger bun as the closest thing they had to a hard roll.

“I knew I wasn’t in New Jersey anymore,” Carl remembers.

But to Carl’s pleasant surprise, there were many students from the North descending upon Athens College. They too were among the scores of high school seniors shopping for a college that wasn’t impossible to get into, a fun college life that led to a degree, and importantly, a vehicle to delay getting drafted into the military. When they all arrived on campus, they found each other, and together they learned the local ways.

Carl tells the story of the cultural adjustment for some of his comrades from the Northeast Corridor to live in a “dry” county, and there was a certain naivete when it came to local segregation practices.

“Some thought the ‘Whites Only’ sign at the laundromat meant only clothes that are white can go in the washing machines,” chuckled Carl.

He hopes that being comfortable with multi-ethnicity due to living in diverse northern neighborhoods was influencing during their time at Athens College.

“We mingled with everyone including various athletes and students from visiting colleges and thought nothing of it. Considering all the turmoil around us at the time, Athens College was a respite from that and a haven for progress.”

The Athens townfolk were just as perplexed with the “Damn Yankees” descending on the town. But with the students came money from home. That purchasing power created common ground, and the Athens residents and merchants became great sponsors of Athens College events, attended the basketball games, and supported the students any way they could.

The melding of the sleepy college town with its new demographic meant unfamiliar accents and colloquialisms like “Y’all” even snuck into the students’ own lexicon as they got to know the locals. Unlike the rest of the country that was embroiled in civil rights, the Cold War, the space race, and especially the rancor over the Vietnam War, Carl says college life in Athens was “carefree,” and early on Carl decided Athens was truly “Pleasantville.”

Carl especially remembers Andy Smith and his men’s clothing store. Carl called it a hangout and said they all shopped there regularly.

“Andy used to call the dorm when a new shipment of clothes he knew we liked came in,” he says. On a visit to Athens 25 years after graduation, Carl visited Andy at his still-going-strong store. “After asking a few questions, Andy remembered me!”

Carl belonged to the ATO fraternity, and when the parties, intramural games, and Greek Life activities were over, they immersed themselves into the community in many ways.

“We conducted food drives for the local community where just about everybody participated,” said Carl. “Many of us helped with blood drives, March of Dimes fundraising, and of course the Athens Christmas parade where we provided elves to escort Santa and pass out candy. The Athens community stepped up when it came to helping others.” 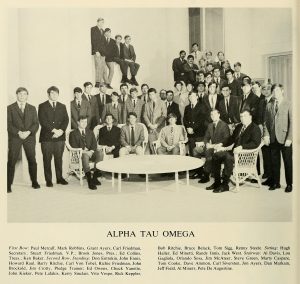 One event that was always fun was Greek Weekend. All the fraternities and sororities joined together for a weekend of competition. Chariot races, Friday night skits, and Sunday night songfests made for a full weekend of fun. Carl and his fraternity brothers and sorority sisters engaged in community service projects alongside their local neighbors while occasionally taking “social trips” to Florida.

“Our community service work created a nice back and forth among the town and the students.”

Carl says that during his stint at Athens College, “Athens was jumping.”  There were well-attended basketball games in the gymnasium, dances in the student union, and concerts at the McCandless Auditorium. A large population lived in on-campus housing, Greek life was proliferating, and commuters were in abundance too.

“So much going on,” says Carl. “There must have been hundreds of people schlepping through the cafeteria and the student union on any given day. It was hard to find a booth.”

In the last half of the 60s, some Athens College students had a penchant for sidestepping the local prohibition laws and often found themselves detained for a spell behind bars.

“The locals looked after us,” Carl said. “Bartenders in Tennessee (notably from Rainey’s, a gas station converted into a bar) would call ahead and tell campus administrators we were on our way home.”

One of those bigwigs answering the calls from Rainey’s was the dean of student personnel at the time, Dr. Bert Hayes, a favorite on campus.

“Dr. Hayes came to one of our Geezerfests in 2010,” Carl remembers (Geezerfest is a reunion event Carl attends regularly). “He still remembered everybody!”

Often referred to as a Renaissance Man, Humanities professor Dr. Hayes had many interests including making pets out of his farm animals and piloting his own plane. He was also a world traveler and a participant in an archeological scholarship in Israel.

Scholastically, Athens College was also experiencing somewhat of a renaissance at the time. According to the 1970 edition of the Athens College yearbook COLUMNS, new courses and majors, and even new teaching techniques like applying education to surrounding life, were being employed. For instance, as the fledgling aerospace industry was intensifying, a gateway to Redstone Arsenal was established. The growing college scene included a flurry of building on campus, including an addition to the library and a new women’s dormitory complex. But Carl remembers interaction with instructors, professors, faculty, and staff was more like a “huge high school” than a highfalutin university.

A case in point according to Carl is the beloved Dr. Angeline Nazaretian, who dedicated 42 years to the Athens State campus as Chair of the Physical Education Department beginning in 1958 and later as Director of Alumni Affairs. ”Angie saw the best in all of us,” remembers Carl. “She is a true legend and was quite a feisty fireplug.”

Dr. Nazaretian lived in a cottage on the southwest corner of campus, and from her perch on the porch, she called out to newcomers by name, ensuring they all felt welcomed and cared about. “After a Geezerfest visit with Miss N, she told us, ‘There is a new jail in town, so y’all will be going to an unfamiliar place.’“

Carl went on to graduate from Athens College with a degree in Physical Education, entered the Army, and honorably served his country. He spent his career as a dedicated public servant in the fields of education, public health, and planning and zoning in the suburbs of Washington DC. He says the foundation of his good life and many adventures stems from the education and social growth he experienced at Athens College. 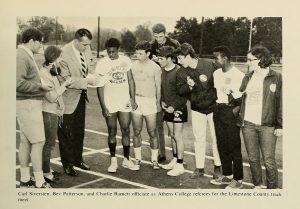 And, he says he was just one of many. According to his assessment of the “at least 75 friends” he kept in contact with, his class produced a steady stream of success stories, including prominent teachers, coaches, principals, business owners and even federal agents and prosecutors.

Come Homecoming Weekend time July 30, Carl will be in Athens yet again to reconnect, share the stories, and continue “the bond that can’t be broken.”  Names Carl mentions from his day who are among those who connotate the best of Athens College are Ann Holland Entriken, Eric Merkt, Carol Field, Penne Lubenthal, Mike Fessler, Paul Metcalf, Kerry Sinclair (1971 class president), and Bill Dunnavent, who Carl watched do radio shows at the local station, and who later went on to become an Alabama broadcast icon and a current member of the Athens State Board of Trustees.

But Carl doesn’t recall anyone from his college days with the talent and the big-man-on-campus status of Steve Mizerak, billiard extraordinaire.

“He was just another Jersey kid,” Carl says. “But his talent was unsurpassed. He hustled all over town and people came to watch.” The son of a New Jersey Billiards state champion, Mizerak was eventually ranked number 6 among the Billiards Digest “50 Greatest Players of the Century.” He did graduate from Athens College in education and taught school for 13 years.

Although campus culture is not as prominent now as it was when Steve Mizerak was roaming the halls, Carl still sees Athens State as serving a unique community that provides a high-tech, affordable college where it is not impossible to get accepted.

“Athens State has always had the ability to renew, refresh, and see the future. That’s why it is thriving today in a completely different spectrum than when I was there, but accomplishing the same mission,” Carl said by phone from his home in Myrtle Beach, SC. “By and large, an Athens State experience opens doors and leads to a great life.”