“I’ve always been a creative person, a creative kid. I used to think that I wanted to build jets one day and become an engineer. But after falling in love with playing the guitar and with art, I realized that I didn’t want to do something to cause me to put it down. After finishing the music industry program at Calhoun, I decided I wanted to go for graphic design, but the advisors told me that I had to go somewhere else, so they suggested Athens State University.

“I saw where Athens State had a full-ride art scholarship, so I submitted pictures of my—in hindsight, crappy—artwork. I don’t know what about it made them pick me, but if my unrefined artwork could get me a full-ride scholarship, that meant that, ‘Hey, maybe I could do this,’ because someone believes in me!  And I was kind of in a low place in my life at the time, so when it happened, I thought, ‘Wait, full-ride scholarship? You mean I’m not a complete failure!?’ It gave me the confidence to really see how far I could take it and improve my skills. That scholarship meant a chance to start over again. To me, that meant that maybe there was a reason God had me there—that I was finally back on the right path for my life and no longer wandering directionless. 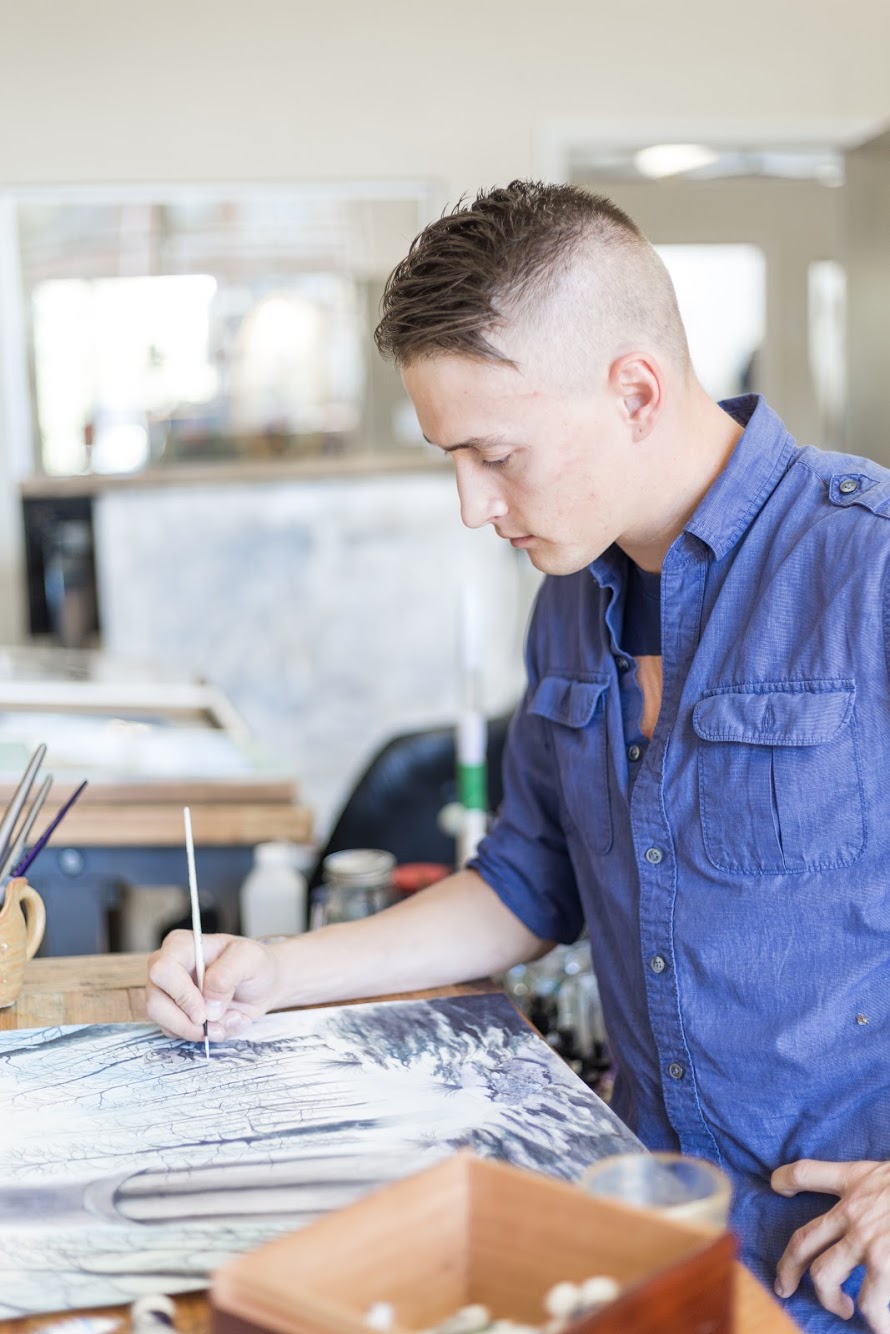 “While I excelled in the art classes, the graphic design classes were difficult for me to keep up with.  Professor Pamela Keller, the head of the art department, was the one who really pushed me to keep going.  She really pushed me to think deeper in my artwork, and conversations with her have actually led to the current work I’m still doing.

“My upbringing was really rough, and after a conversation with Ms. Keller about it, she said, ‘I think it would be a good idea for you to do three works of art that represent what you went through as a kid and how it affected you.’ You know what I said? ‘Eh, nah.  I’m good.’ It seemed awkward to me, because I was thinking of it literally in the sense of watching my parents fight and painting pictures of it, or the other things I had to deal with as a kid. ‘Nah.  That’s weird,’ I thought.

“I have a bunch of recurring dreams of finding abandoned rockets, and I had this idea after passing through Huntsville and seeing the Saturn I, I thought, ‘What if I was a kid in the woods and found this thing abandoned? What would I do with it?’ I would probably build a treehouse out of it and invite all of my friends! So a couple of ideas started to come to me.

“But first, I decided instead of building a treehouse out of it, I’m going to illustrate a destroyed rocket with a tree growing through it. I realized that the rocket—my favorite rocket—was a representation of who I wanted to be and the gnarled tree twisting through it represented all the things that were never supposed to be there—things I never healed from. And that’s how I felt at the time. I felt like I had all this potential, all this promise, and that I had somehow wasted it because of the type of person I was becoming. As I was illustrating it, it was like looking into a mirror; basically who I was at the core that got damaged. I poured out all my anger into it—I was on the verge of tears when I started it.

“I showed my illustration of the destroyed rocket to my professor and she loved it, stating, ‘Yeah, that’s exactly what I’m asking you to do.’ So from there I got carried away and developed the idea further.  Slowly, the rockets that were destroyed with trees developed into treehouses with kids thriving and playing in them. It was like new life returning. It’s like viewing a bad situation in a beautiful light, where we’ve got this thing with all this potential that was destroyed by things that were not meant to be there, but now we’re gonna stop focusing on what it failed to become and we’re gonna build something really cool out of it. That was the beginning that sparked my original art series Failure to Launch and Secret in the Woods, because of my recurring dreams equipped with Ms. Keller really causing me to get out of my box.

“Ultimately, I was able to self-heal through my art, because it caused me to start doing more work outside of my school projects and really just dive into the damage that was done in order to make something beautiful out of it. My job at Space Camp at the Space and Rocket Center really fueled my imagination.  Working with those kids was one of the best experiences. In a way, getting to work with them really did feel like those dreams I was having of finding the abandoned rockets. I got really protective of those kids and wanted to encourage them to never give up on their dreams like I initially had. I was able to transition from a really dark place with my art, with the treehouses, and just being able to see life through the eyes of a kid again—holding that childlike fascination.

“I’ve always been concerned about what I want to do and what God made me for. I’ve always wanted to know what I was meant for, but at the same time, I am a very over-analytical person and got stuck in the same trap of what am I supposed to be doing? versus what do I want to do?  Kind of like an ‘analysis-paralysis.’ But over time, I’ve realized that if there’s something that really burns in you to do—do that.  Follow that. If you really pour yourself into it, you’ll eventually find the right opportunities, right connections and open doors. It’s really sad to me how it seems that over 90% of Huntsville is of the mindset of ‘I’m going to be an engineer because that pays well,’ and they lay down all their dreams, they lay down everything they felt like they were made for. Do what you love. Do what you were made for.  That’s the only way you’re going to actually make a difference in the world. Otherwise, you’re going to waste your potential.”

Chris has featured his art in many shows across the Southeast, where he has been acknowledged in several competitions, including Space Coast in Cape Canaveral, where he placed first in watercolor. He also held many solo art shows in museums, including the Montgomery Museum of Fine Art, as he continued growing as an artist. His most recent work involved teaming with the Panoply Arts Festival in Huntsville, creating the poster for the 2019 event. Presently, Chris rents his own studio at Lowe Mill Arts & Entertainment, where he spends most of his days working on new ideas and creating beautiful masterpieces.

For more information or to view his original creations, please visit his website at EtherealGeometryArts.com.