Dr. Angeline Nazaretian, a long-time member of the Athens State community, passed away on Sunday, March 17, 2019. Known to most as “Angie” or “Miss N,” she began her tenure at Athens College in 1958 and called it her home for more than 42 years.

She was preceded in death by her parents, Jeanne O’Nick Nazaretian and Alice Yarchak Nazaretian. She is survived by a sister, Mary Jeanne Smith and brother, Peter Nazaretian; three nephews and one niece, all living in Florida and Jefferson County, Alabama. Dr. Nazaretian attended Fairfield City Schools in Birmingham, Alabama, graduating in 1946. She received her Bachelor of Science degree in Health and Physical Education in 1950 from Montevallo. Dr. Nazaretian continued her studies at the University of Alabama, earning a Master of Arts degree in Health and Physical Education in 1958 and a Doctor of Education degree in 1979.

There is no way possible to list all of the many accomplishments that she achieved throughout her lifetime. She touched many

lives, opened many doors, and created opportunities in the physical, mental, and social health triangle, not only at Athens State but within the city of Athens and throughout the state of Alabama. 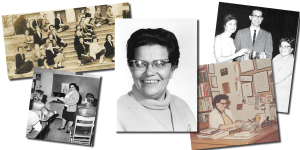 Her mark is embedded in many regional and national organizations involving health and physical education. All of this started at Athens College where she established a certified program in Health, Physical Education, and Recreation. Through her efforts to serve the physical needs of those with intellectual disabilities, she created a Special Olympics Program at Athens College, which quickly expanded throughout the state of Alabama. She held the first Special Olympics competition in Alabama for 100 children at Athens State College in 1968 and served on the Alabama Special Olympics Board of Directors for twenty-five years. In addition to Special Olympics, she was selected by the National Olympics Committee to carry the Olympic Torch in Limestone County, Alabama on its way to Atlanta (at the age of 68). In addition to her work with those with special needs, Dr. Nazaretian became a prominent leader throughout her community where she took on the creation of a fitness program, as well as a community service program fortheelderly,theRetiredSeniorVolunteerProgram,better known as RSVP. Governor George C. Wallace recognized Dr. Nazaretian in 1983 by declaring “Angie Nazaretian Day” for her efforts with Special Children. She was also selected to be the Director and Coordinator of the “First Women Sports Conference” (NAGWS) which took place on the campus of Athens State College. This conference touched high schools, coaches, and college women athletes, paving the way for many “firsts” in women’s sports competitions. She was recognized for these efforts by being selected and inducted into the Limestone Sports Hall of Fame and appointed to the Governor’s Commission on Physical Fitness and Sports, serving the people throughout Alabama. 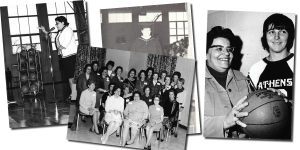 The last ten years of her tenure at Athens State University were dedicated to the Alumni Association, where she continued to excel. In her ten years as Director, she enhanced the efforts of the alumni team, grew its board membership, and expanded the alumni recognition and membership programs. 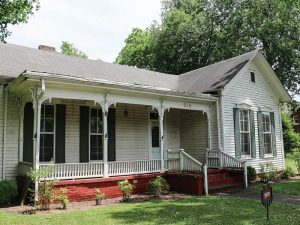 Those who knew Miss N know her heart belonged to whomever she came in contact with. There were no strangers; wherever she was, she touched lives. If she saw hunger, she would feed and nurture, as she did with many students who passed through the doors of the college. Students loved to sit on the porch of her house, on the southwest corner of campus, or to take their children through her amazing house of collectibles. While Miss N is no longer here with us, the memories will continue to live on.

The University now has ownership of The Nazaretian Home and has partnered with the Alumni Association to renovate and restore it. The home is slated to be used for alumni events and as a welcome center for visitors to campus. Always a gracious host, Miss N’s home was indeed a welcome center, and this is a way to honor her for many years to come. As her personalized Athens State car tag said: “Ya’ll Come!”