“I believe that I received a good education when I was at Athens.  All of my family feels that way.  Athens State University means a whole lot to the Newby family.  It has helped us to grow and be successful.”

Growing cotton is second nature to long-time farmer and Limestone County native Jerry Newby.  His family has a long and storied history in Athens, dating back to the 1800s.  Farming runs deep in the Newby family – seven generations deep, to be exact.

Jerry has had a successful career focused around farming; he served as the president of the Alabama Farmers Federation and Alfa Insurance from 1998 until 2012.  Once part owner of Newby Farms and a long-time farmer, he has seen firsthand the impact of technological advancements and innovations that have revolutionized the farming industry.  From planting and picking cotton by hand to operating equipment that can plant and harvest multiple rows at a time, farming has changed a lot over the years.

As Jerry looks back at his life and his career, he is thankful for the opportunities that have come his way and also for the people who have helped make it all happen.  A focus on education has been apparent throughout the Newby family, especially when skills can be directly applied in real-world work environments.  Jerry’s family has a rich history in earning an education while working their way through school, particularly at Athens College, now Athens State University.  However, Jerry’s connection to Athens State goes even deeper, as his parents met and fell in love during their time on the historic campus, and Jerry, along with many other members of the Newby family, has followed in the tradition of attending the institution. 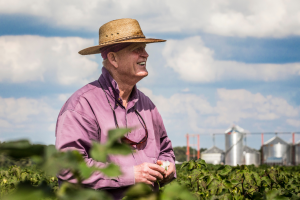 ALL IN THE FAMILY

Jerry’s father, James M. Newby, completed high school in 1939.  Unable to pay college tuition, he worked on the family farm the first year he was out of high school to save enough money to enroll at Athens College.  His college career began in the winter quarter of 1940.  During that time, the Methodist Church (who operated Athens College at the time) had purchased a hosiery mill in Decatur to allow students to work their way through school and pay their tuition, which James took advantage of.

Jerry’s aunt, Mary, was also enrolled at Athens College during this time, and his mother, Martha, (Mary’s sister) enrolled in the fall of 1940, both from Columbia, Tennessee.  They both chose to attend Athens College because it was a Methodist institution.  During her time on campus, Martha worked her way through school as the on-campus mailer, distributing mail to the campus offices and dormitories and delivering the mail to and from the local post office.  She graduated with a degree in education in 1944.

James M. and Martha got married at First Baptist Church, the home of the current First Baptist Church Family Life Center.  “They were both 22, and Daddy had been away with the Army.  He arrived in town, they got married, had dinner at the old Ross Hotel where they were staying, and at 4:00 AM the next morning, the newlyweds were headed to Texas where he was stationed with the Army.  He was stationed in California prior to his deployment in the European Theater,” says Jerry.

Once James shipped out to Europe, Martha returned to Columbia, Tennessee.  Jimmy, Jerry’s brother, was born in 1945; once James successfully completed his deployment, they moved to Athens.  Jerry was born in 1947, and his mother began teaching in Limestone County.  His father completed his business degree from Athens College in 1948.  He built a country store that he operated in Sardis Springs.  “Daddy was a farmer, a business owner, and a family man.  He eventually became a public servant and served on the Limestone County Board of Education.  Later he was elected tax assessor and probate judge of Limestone County,” says Jerry.

Jerry’s love for farming began at an early age.  As Jerry and his brother Jimmy matured and grew, they worked on the dairy farm and then they started “working a little cotton.”  His father gifted a percentage of the crops to each son to encourage them to have a vested interest in the farm.  At this time, the farm was operated by Jerry’s grandfather, father, brother, and himself.  In 1963, they purchased their first one-row cotton picker, and after graduating high school in 1966, Jerry, along with his father and brother, formed James Newby and Sons Farm.

The belief that a college education was beneficial was instilled early on by his parents, and they strongly encouraged them to go to college.  They spoke frequently about their love for Athens College, the memories they had together there, and how an education helps make sound decisions in business dealings and in life.  After graduating high school, Jerry started taking basic education courses at Calhoun Community College; having a stake in the farm, Jerry knew he wanted to stay close to home when completing his education.  He enrolled at Athens College and began studying business, as farming is a business that requires the same knowledge, processes, and considerations as any other retail operation.

Jerry graduated from Athens College in 1972 with his business degree.  He later became very involved in the Alabama Farmers Federation.  His leadership began with an innocent conversation with the man who was in charge of the Young Farmers who felt that Limestone County needed to have a division of the Alabama Farmers Federation, so a meeting was held to discuss.  “Five couples and myself were in attendance.  All the men there had a wife but me, and they wanted us to make a decision whether we wanted to have a division there.  The County President of the Federation said that the County would support it.  A vote was taken, and it was agreed that Limestone County would participate.  They needed a chairman, and since everyone had a wife except me, they nominated me; and that’s how I became the chairman.”

Jerry is quick to point out that while he has found success in his life and business dealings, it was not solely due to his own efforts; it takes a lot of hard work by many different people.  “The only way to be successful is to work together,” says Jerry.  “This is especially true in a farming operation.  I’ve been very fortunate to have people surrounding me that have helped me get to where I am today.  I feel very blessed.” 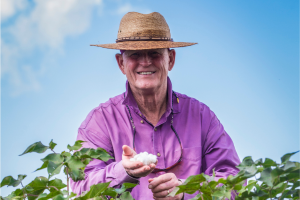 In all, eight members of Jerry’s family have graduated from Athens State (Jerry; his wife, Dianne; his parents, James M. and Martha; his aunt, Mary; his brother, Jimmy; his nephew, John; and his daughter, Elizabeth).  “I believe that I received a good education when I was at Athens,” says Jerry.  “All of my family feels that way.  Athens State University means a whole lot to the Newby family.  It has helped us to grow and be successful.”  He also said that Athens State University means a great deal to the city of Athens and surrounding areas.  “I think Athens State University can give a person a new lease in a career, in life in general.  Athens State University has the programs that people need, and they can get a good education here at an affordable cost – the lowest in the state of Alabama and one of the lowest in the country.  Athens State University has the ability to touch people’s lives to make their lives better.”  Jerry continues, “I have had friends that have come to Athens and have graduated at 55 or 60 years old, and it changed their lives for the better.  I think one of the things that a college education does for you is that it gives you confidence.  You had to work to get that degree; it gives you confidence that you can be successful.”  As the top university in the state of Alabama for non-traditional students, Athens State focuses on providing educational opportunities to learners of any age.

Any good farmer knows that before you can step back and admire you crop, you have to plant the seeds.  You have to put a lot of work into nurturing the crop, protecting it along the way and providing the resources needed to allow it to reach its full potential.  Much in the same for young students, aiming for the stars but needing a bit of guidance along the way.  That’s why the Newby family feels strongly about giving back to the community, especially students pursuing a quality education.  The family has endowed six scholarships that provide opportunities for Athens State students each year, directly impacting student success.

Jerry and his wife, Dianne, have three children, Elizabeth, Mary Anna, and Jerry Allen.  They all grew up on the Newby farm, and Elizabeth is a 2007 graduate of Athens State.  Jerry no longer has a hand in the business operations of Newby Farms, but farming will forever be in his blood.  “I really liked farming.  I loved farming.  And I still do,” he says.