“I chose education because I truly believe anytime you want to impact a community – or definitely a generation – it starts with education. So far within my career in music, I love seeing how people have connected to it, and just that connection – it shows me how important community is. I hope that I can serve in a civic capacity where I can use music but also influence people.”

When it comes to following our dreams, the fear of failure often stops us from trying. Our dreams sometimes seem unattainable or unrealistic, especially when it comes to building a solid career. However, one special individual is casting her doubts aside and is finding a way to turn her passions into a future career. “My life in music is where I’d love to stay. Music means a lot to me, but the more time I spend out in the community sharing my music, I see a need for education as well.” Meet Victoria Jones, an aspiring musician and current College of Education student at Athens State University who is turning her dreams into a reality.

At a young age, Victoria felt called to pick up an instrument. “I’ve always felt so connected to my guitar. I remember telling my parents, ‘I believe that I’m destined to play the guitar,’ and they were like, ‘You’ve never seen a guitar before!’ Even though I’d never seen it, just the sound of it… I have always liked the look of how intimate it was when somebody got to hold something like that.” Following her calling, Victoria started playing the guitar and writing songs at fifteen.

The power of words inspired Victoria to pursue a career in music. “Even though I sing and song-write, I love lyricism, and I love words because they really touch people.” In middle school, Victoria’s teachers recognized her writing talents and began encouraging her to write. “At the time, I thought I just wanted to be a poet,” Victoria said. “Fifteen is when I actually wrote my first song. It was one of those pinch-myself moments, like ‘Is this real? Can I really do this?’ And from there, it’s been a discipline of stewarding my gift.”

Victoria also plays the piano, a place where she now finds herself writing most of her songs. “I have more music originating from piano because I’m starting to write there and it’s so open,” she stated. She draws inspiration for her music from her faith, her life, and people she meets. “A lot of my music is life music, so I’m writing about where I am. Also, whenever you’re doing music, you get entrusted with a lot of people, too,” she shared. “Those people are sharing their stories, so that rubs off on you as well.” 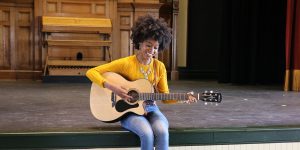 Victoria has now been invested in music for over eight years, and hopes to continue and grow in it. “I’ve learned – just like with education or anything you pursue – it’s an endurance training,” she stated. “It’s a continual grind, it’s a continual discipline. I don’t think there’s such a thing as ‘making it,’ but you definitely have to practice contentment wherever you are,” Victoria advised.

While music is her main focus, Victoria is currently working on obtaining her degree in education at Athens State University. “I chose education because I truly believe anytime you want to impact a community—or definitely a generation—it starts with education,” she stated.  She hopes to make music her full-time occupation and incorporate her community into future projects, educating them about how music can be transformative. “So far within my career in music, I love seeing how people have connected to it, and just that connection – it shows me how important community is,” stated Victoria. “I hope that I can serve in a civic capacity where I can use music but also influence people.”

Victoria has already been able to achieve an impressive list of accomplishments so early in her music career. She recorded her first EP at 318 Productions in Huntsville where it was produced by Canita Rogers and mastered by Grammy-nominated Kelvin Wooten. She has also traveled with her music and has performed for non-profit organizations such as The Microwave Dave Music Foundation and The Little Orange Fish, which promotes mental health awareness.

Victoria is a truly remarkable, genuine young woman who proves that dreams can come true as long as you keep working toward them. With her fearless drive, Victoria is sure to continue to reach new and exciting heights in every facet of her life and career. “My journey has been really organic,” she stated. “It’s the most gratifying job. It’s something that I love doing.”