“When I got to Athens State, it was the polar opposite of what I had experienced at that other school, and I was like ‘Wow! This is a place I feel like I belong and I feel like I can do better and actually grow to my full potential.'”

“The day that I knew I was passionate about the natural world, I wanted to not only learn more about it, but teach and educate others of its significance. Growing up, Steve Irwin was my hero. I would binge-watch him and Jeff Corwin on Animal Planet non-stop—before binge-watching was even a thing!

“I grew up on a farm, so I was always surrounded by animals. One day, when I was about five years old, my mom took me to the barn to see the new kittens our farm cat just had, and on our way there was a grey rat-snake lying in the path. My mom has the worst fear of snakes, and in her panic from seeing the snake, ran—and when she panicked, I panicked, so I also ran! But then my rationalization came back to me and I remembered from all those educational programs that this snake is not something that is going to be dangerous—it’s not even venomous, so why would I be so afraid? So I turned around, and when my mom calmed down and came back to where I was, she actually found me free-handling the snake. It was at that moment that I had the breakthrough of realizing that there’s more to the natural world than what the common culture would have it. I wanted to be able to share that experience so that people like my mother don’t have panic attacks.

“Originally when I left high school, I was set to go to this one college, and when I got there it was like being in an alien world. I just knew I didn’t belong there. All I knew was that I wanted to pursue general biology and education, and Athens State had a good reputation for teachers and future educators. My hope after graduating with a master’s in general biology and minor in education is to start off with a K-12 classroom doing environmental or situational education for the natural sciences. When I got to Athens State, it was the polar opposite of what I had experienced at that other school, and I was like ‘Wow! This is a place I feel like I belong and I feel like I can do better and actually grow to my full potential.’

“After I arrived at Athens State, I told myself that I was going to be a ‘yes-man,’ because I had spent my high school career and the junior college level kind of shying away from doing too much of anything. I was able to be a part of multiple projects; I even agreed to organize a ‘Bug Mug Shot’ competition for local ninth and tenth grade students. As a result, it has been an awesome and wonderful experience that has helped me in my career pursuits. The faculty has been very personal, as they actually want to see each individual student grow to meet their full potential.

“Something else I have experienced that has been both immersing and captivating since attending this college has been the student base. People of all age groups and different life paths are all studying and working together to achieve the same goal of bettering his or herself. Money can’t buy that. There’s a quote that I can only paraphrase: ‘Only a fool thinks that educations ends.’ Education is not a destination, it’s not something that is achieved at a certain milestone and this, that, and the other. It’s a journey that anyone can choose to take on at any given time in their life. I think as teachers, as future educators, we need to emphasize that a lot more than we do. For years we have treated it like, ‘At this age, you’ve done this, and this age that,’ but why?  Why can you not be the 50-year old lady that’s come back and decided she wants to better herself because she now has the opportunity to? We shouldn’t let that cultivate an environment to where that would seem to be the minority or the outlier group that defines—what I think—education should be in America. 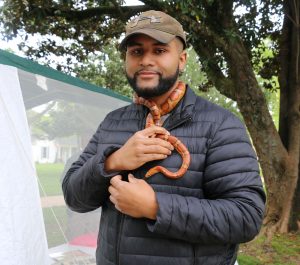 “Again, Steve Irwin is my hero—the one who got me really zealous about the natural world, and inspired me with his words, ‘The best tool for education that we can use is passion.’ If you’re passionate about something, that’s going to make other people excited and passionate about it also. That is something that I take with me right now when I go into the classroom to tutor, when I go do my field experience. I try to take that passion in and convey it to these students, and it’s been pretty successful so far. My desire is to continue to educate and show people the importance of different animals and things in nature by unveiling their importance in the ecosystem, the benefits that humanity gets from them, and why we should tolerate them.

“Athens State has been the place that has helped me set forth and accomplish this dream. I’ll always look back at the times I’ve spent here, the people I’ve met, and the opportunities I’ve had at this place and remember it very fondly, because it’s home.”

In addition to organizing the “Bug Mug Shot” competition for high school students, Tevin most recently helped run an educational tent with the Athens State biology department for the 2019 Arbor Day festival on campus. Tevin was able to live out his dream as he handled the live amphibians and reptiles (including snakes) while educating those present about their significance, much like his childhood hero and inspiration, Steve Irwin.