As part of the City of Athens Bicentennial Bash in November 2018, the Friendship Quilters Guild created quilts that represent iconic and historic places in Athens and Limestone County. To represent Athens State University, Jane Cook of Madison, Alabama created the “Hebrew the Bear” quilt and won 2nd place in the Bicentennial Quilters Competition. 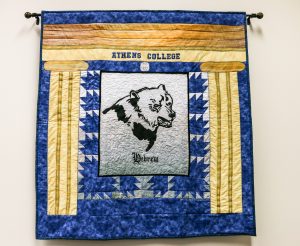 The quilt’s focal point, Athens State’s mascot, Hebrew, is surrounded by a bear claw pattern and two columns to represent Founders Hall. Jane, now 90 years old, described her quilt as follows: “Hebrew the Bear, featured here, is the proud mascot and keeps a watchful eye on all activities on campus. He is also honored with a full-size statue on campus. The column is a distinct icon, and it is found throughout the architecture of the campus. The patchwork blocks surrounding Hebrew are an old quilt pattern called Bear Claw.” 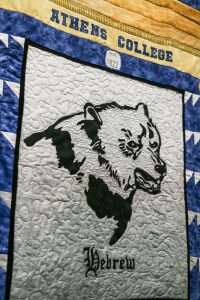