“Athens State smoothed off my rough edges, prepared me in thinking and planning and in the service.”

“What would you think if somebody came out of the blue and gave you a knighthood?” jokingly asked retired Navy veteran and Athens State alumnus, Johnny Corbin, who recently was knighted as Commander of the Star of Ethiopia by the Ethiopian government. Johnny’s story leading to this honor comes from a lifetime of events that continues to transcend throughout his life to this day.

Johnny attended Athens State University after retiring from the Navy in 1989 to finish his bachelor’s degree in business administration and graduated in 1991. “In the Navy we had a lot of computers, and I was a computer specialist as well as communications,” he said. “And with my management background, the vocational dean thought it would be better to go into business.”

Born in Groom, Texas, Johnny was raised as a military brat, as his father was recalled for Korea when he was a baby. Military life gave him the opportunity to travel the world as he grew up and attend schools all over the United States and even in Italy. Johnny was drafted and was supposed to go into the Army in 1969, but joined the Navy instead, as they guaranteed him entrance into nuclear school. Upon completion of his schooling, he volunteered for Vietnam in 1970 to take his father’s place, who had already served in World War II, Korea and Vietnam. “At that time, one family member was all they allowed in the country, so if I was there, he couldn’t go,” he explained.

The Navy sent Johnny to East Africa in May of 1970, where he found himself in the middle of Ethiopia’s civil war. “There was a group called the ‘Eritrean Liberation Front’ that were fighting the Ethiopians for their freedom, so there were bad things going on,” Johnny recollected. Posted in Kagnew Station on active duty, Johnny worked diligently and met his wife, but even more unexpectedly, met Ethiopia’s Imperial Majesty, Haile Selassie, of whom he got to know from his duties on the base. “Haile would come up and do his dental work and a lot of other things on our base, and he was always relaxed on our base because he was protected and I knew him there,” he said. Johnny recorded many of their encounters together on film, and little did he know at the time how significantly it would impact his future.

Because of Ethiopia’s civil war and all the violence happening during that time, Haile Selassie’s 11-year-old grandson, Prince Ermias Sahle Selassie, had been sent to England, where Queen Elizabeth protected him until he reached maturity. This ultimately saved the prince’s life, as things took a turn for the worse in his home country. “My first child was born in Ethiopia; he was six months old when they overthrew Haile and they held us for four days; it took us four days to get out of the country. And then they killed 74 of the royal family,” Johnny sadly recalled. “Haile Selassie made a constitution where they were free when he took office in 1930, and he, in fact, could have stopped the overthrow. ‘I don’t want any child of Ethiopia harmed for me,’ he said.  He let them remove him from power and ultimately kill him,” Johnny stated.

As time passed, Johnny retired from service and, years later, attended a reunion where he met a previous counselor to the late Emperor Selassie who was meeting and interviewing people from the war. “He was interviewing all of us that had been there for our memories because he was going to show it to the people of Ethiopia that it wasn’t bad in those days,” Johnny said. They both clicked instantly, and Johnny wrote and shared articles about his times with the Emperor. “He told me at one point that whatever I said about his grandfather, the prince cried,” he said. 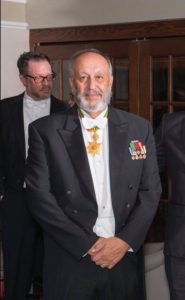 Being touched by Haile and Johnny’s relationship, the Imperial Highness, Ermias wanted to honor Johnny with a knighthood. “I don’t know, but I think it has something to do with being an American, but being a liaison with the Ethiopian government,” Johnny contemplated.  “I’m not sure I’ve earned it… I earned it because I knew his grandfather and guarded his grandfather, and I had movies of his grandfather, but that was my job,” he stated. “I don’t know that it translates to something like this and it’s just something special that I didn’t expect.”

Along with his title, Johnny was given several medals to acknowledge his knighthood. “It’s got to be more than 50 years old,” he stated. “There will never be any more of these made, because the man who made them is dead, so they’re valuable.” The knighthood is a very old one that dates back many years, remaining to be a part of Ethiopia’s Imperial Council and history. It is truly a high honor and a story that stands out from many. “As to why I got it, I cannot tell you,” Johnny marveled. “I think that there’s something greater than me that controls things.”

The experiences Johnny had in Ethiopia still shape various paths in his life to this day. Johnny has been one out of several of those involved in the events that happened in Ethiopia who have been interviewed for a possible documentary. He recently returned to Ethiopia with his filmmaker friend on a mission to help those in need. Before the trip took place, Johnny laid out the plans for the venture: “He’s making a documentary for this trip of everything we’re going to do,” Johnny stated.  “We’re going to take 4,000 pairs of glasses to the children that have issues with their vision, including the educators and the staff, and if they have issues, we’re going to give them glasses, too.” Johnny explained that the trip will also consist of doctors who will give immunizations to those in need. “So this is going to be a humanitarian, good-will trip,” he stated.

Johnny’s life has truly been unique and admirable. And while his time at Athens State University seems short-lived compared to his many other adventures, he still looks back fondly of his experiences of the school. “I would say that Athens State smoothed off my rough edges, prepared me in thinking and planning and in the service,” he stated. Thanks to his degree from Athens State, Johnny currently works as a site manager for the Alabama State Department of Labor. He is also the manager for the Sheffield Career Center, where he assists those in search of a job.

Our time on earth comes in many shapes, has many chapters, and has numerous choices. However, some things happen that are out of our control. Johnny Corbin’s life is a prime example. Looking back, while Johnny has always wished for a normal life, he realized that is rarely the case. “When you say ‘normal,’ there is no normal, because life is what happens when you’re busy doing other things,” he said. “But it’s not been a bad life, I’ll give it that.” Truly something he never expected, Johnny’s knighthood remains to be an amazing and honorable experience that he will never forget.